The story of our founder - Ashley Iles

“Memories of a Sheffield Toolmaker” 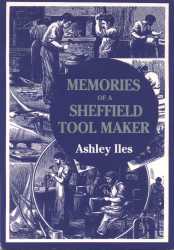 This book interweaves two stories. One is of a boy from a working class family who was apprenticed to the pattern making trade during the depression. He finally worked his way into his own edge tool business and, after a long struggle to establish himself, became an important maker and world-wide distributor of quality carving and turning tools.

The other story is that of the Sheffield hand trades in the final years before their demise, when they still had changed little from Victorian times.

Unfortunately, this book is no longer available for sale as it has sold out. But it may be possible to borrow a copy from your local library.

"All is well in a steelworks until a rolling mill breaks down. Then bedlam reigns in the maintenance shops until it is working again. As my father had a turn of speed on the bench, he was usually chosen for the breakdowns and often worked all night and weekend. It frequently fell to me, as a small boy, to take his Sunday lunch in a basket. I shall never forget one Sunday when he had in the lathe a lagged up barrel - 6 feet long, 4 feet in diameter-and was skimming it up with his trying-plane. Please don't think that you are a woodturner the day you master the skew chisel."

"My job was making and changing the grinding wheels in a large grinding shop where table knives were ground by machine. The girls were on piecework and knew exactly how long a wheel change should take; after the allotted time, the invectives would flow very freely. Between wheel changes I made grinding wheels, mixing the compound for baking in an oven. In between times I had nothing to do so I studied the plant and the layout. Never in my wildest dreams did I think I would attend its auction fifty years later in 1986 and spend £1000 on machinery. At 15 years of age, 64 is light years away"

"In the 1960's Sheffield, the advent of technology was becoming evident, and serious attempts were being made to introduce mass-production into the tool and cutlery trades. This was quite logical but, inevitably, quality began to suffer. Drop stamps were used to make edge tools for woodworkers, grinding machines were redesigned and were adapted to chisels, gouges, and many more tools where edge keeping qualities were important. Mass production has its uses, but it can never produce the same quality as the loving care of skilled hand forgers, grinders,hardeners and cutlers.

I realised the product I intended to make could not be satisfactorily mass-produced and that there would be an ever increasing demand for tools made in the old, traditional way."